We do so by looking at some selected European top leagues to see if there are any differences between the leagues and the analysis will include all the full seasons from 2011/12 – 2018/19 plus the 2019/20 season until when the corona virus stopped all tournaments.

It is our aim to specifically address the following questions:

The analysis includes the following leagues:

In total, we have a database covering 25,029 matches so it is fair to say that we should be able to make some serious analysis and conclusions on the subject.

What defines a favourite?

A favourite does NOT need to be below odds 2.0 (i.e., ”odds on”) to constitute a favourite by this definition – we will later look at performance related to various odds ranges but at this general level, any odds are accepted.

In total, 53.5% of the favourites won (including when Draws were the ”favourites”).

If we split this into Home, Draw & Away, the figures look like this:

We can look at it in a slightly different way to additional information.

The table below shows the outcome combined with favourite (home vs away):

So we find that the home team wins 46% of the matches, while the away team wins 29% of the matches. We can use these figures to calculate how much the home advantage actually is: If it did not matter at all playing home, away or on neutral ground, you would expect the home and away wins to be exactly the same, but since they are not, playing in front of a home crowd cheering you on clearly has a positive impact.

The home team win percentage is clearly much lower than the number of times the home team is actually the favourite (55% wins vs 70% favourites), but so are the away team figures. The reason is that the Draw happens more than ”Odds Favourite” in itself would suggest. It is important, however, to note that this does not mean the odds are wrong as a whole – it simply means than on the single games, the odds can be ”wrong” (bear in mind that just because a team is a major favourite, say at odds 1.10, it still means that it will be expected NOT to win in 1/10 matches like this) but as a total, they may be right.

This may sound confusing, but if we look at the odds vs the aggregated number of wins, it may be clearer what we mean.

For every match, the odds suggest a likelihood of the 3 outcomes – the home win, the draw, and the away win.

Let’s say that we, for instance, have a match with the following odds:

From these odds, we can calculate the ”implied” probability of the three potential outcomes – but we have to take any bookmaker overround into account (which is basically the bookmaker’s ”edge”, i.e. how they primarily make their money).

If we start by using the odds as they are, the implied probabilities are:

Since the total probability can only be 100% – no more, no less – we need to divide all the probabilities by 1.0536, so the actual estimated probability by the bookmaker for this match is:

We can now do this for all the matches and thus calculate a total expected number of home wins, draws and away wins, and compare these figures to the actual figures.

The result is amazingly accurate… as shown in the diagram below: 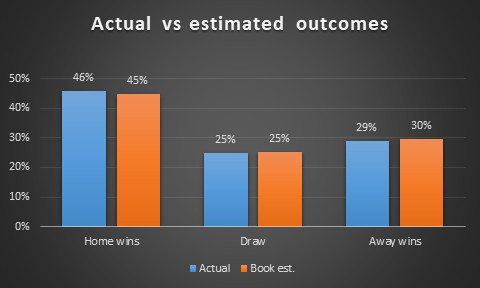 So, the difference between the bookmaker’s estimate and the actual outcome is pretty much just a small decimal number. If anything, it certainly shows that the bookmakers know what they are doing..!

Going back to the actual outcomes, we saw that the home team wins 46% of the matches. This can, of course, be ”translated” into odds – a win rate of 46% equals an average odds of 1/0,46 = 2.17. If we disregard the overround for a second, what this means is that a match where the home team has odds at 2.17 or close to it, will be a match where they two teams are actually considered totally even in quality. The only thing that makes the home team become the favourite is simply the fact, that they are the home team, i.e. they have the home team advantage. In fact, we can calculate the exact ”true” average odds for a match with two perfectly even teams:

Bear in mind that these odds are averages and do not take into account the fact that some teams are much better at home than away or vice versa, compared to the norm.

Now that we have seen, that overall the home advantage is ”worth” 22.67% on a general level across all the leagues included, let’s have a look if there are any significant differences between the leagues.

This is shown in the diagram below. 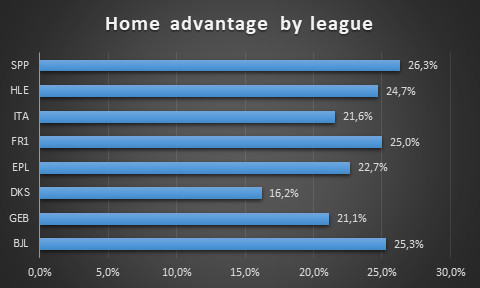 We can clearly see that there are differences between the leagues and one league stands out in particular, the Danish Superliga, where the home advantage is less significant. The English Premier League is spot on the average while the league with the highest home advantage appears to be the Spanish Primera Divisíon.

The Danish Superliga is the league with the lowest attendance figures, so maybe that is the reason for the lower home advantage?

Below is shown the attendances for the years 2011-19 by league: 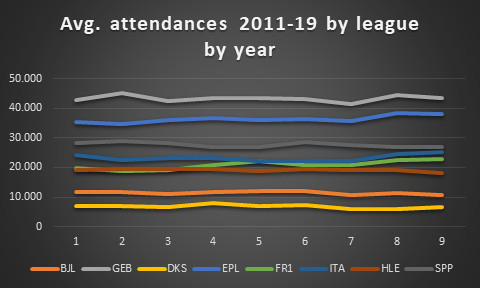 The average for the period is as follows: 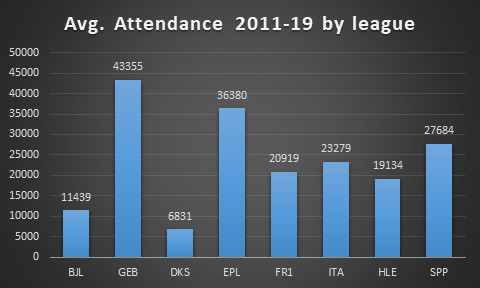 We saw previously that the bookmakers are very good at estimating wins, draws, and losses on an aggregate scale but how good are they if we break it down by league? 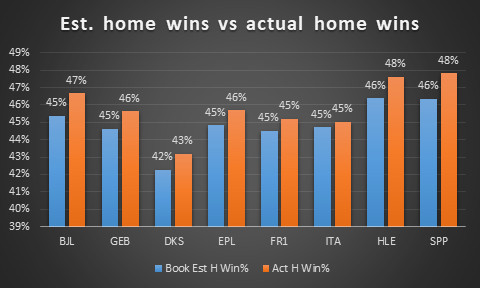 We find that the bookmakers tend to underestimate the home team generally, albeit not by much.

If we narrow it down to odds favourites only, we get the following: 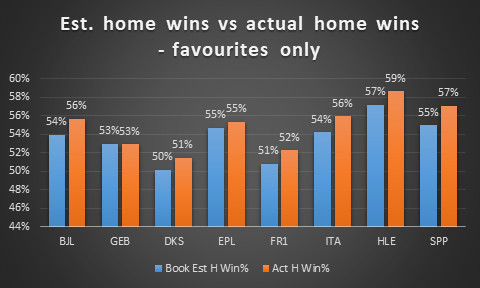 We get pretty much the same picture – a small tendency by the bookmakers to underestimate the home advantage, but only to a small degree.

Is it profitable to back favourites?

Given that we have seen that the bookmakers are very good at estimating the winners on an aggregate level, it would be very likely that just backing the favourites blindly would not be profitable, and this is very much the case as shown in the table below.

For every $100 spent, you would lose $4. The smallest loss is found in the Italian Seria A at just 1%, but generally blindly backing the favourites is clearly not a good idea. Narrowing it down to home favourites only does not improve things either:

It was our aim with this article to gain some insight into how favourites perform and if there is a profit just backing them blindly.

We found the following:

The following sites were used for this research: