A recent study found that football teams retain home advantage with no crowd – in other words, the lack of (home) support is not a key factor in match results and the home advantage is still present even without a home crowd (read more about that study here).

However, there was one issue with that study: It was based on the 2019-20 season, and so it was based on a season that was approximately 70% finished and with teams most likely still approaching away games in pretty much the same way they used to. We want to see if a new season, with all the learnings and experience from the previous one, would change this and so we analyse the results of the 2020-21 season and compare only results for the periods July-March in order to make sure we use the same ”stages” of the seasons (i.e., we do not compare run-ins vs the early parts of the season). The results are very interesting!

Leagues included in this research

We have in a previous article looked at home favourites and how often they win, etc. (this article).

For this study, we will focus on the major European leagues.

According to this site, the Top 6 European leagues in terms of revenue are:

We will look at these leagues to find if the home advantage has changed during the 2020-21 season vs the previous ones.

Before we dig into how each league has performed, let’s take a look at the overall picture. 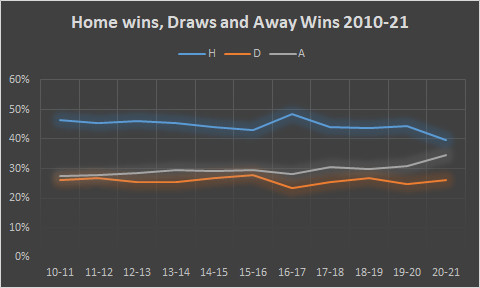 As can be seen from the illustration, our results show that there has been a significant drop in home wins this season vs the previous seasons and the away wins percentage has similarly increased this season.

When we compare the 2020-21 figures to the average of the seasons before (2010-2020), the home wins have been reduced by 12%. Therefore, we believe that for the leagues involved the overall results suggest that the home advantage has been diminished by the fact that there is no home crowd to support the home team.

We will now look at how the individual leagues have been affected by the lack of spectators. 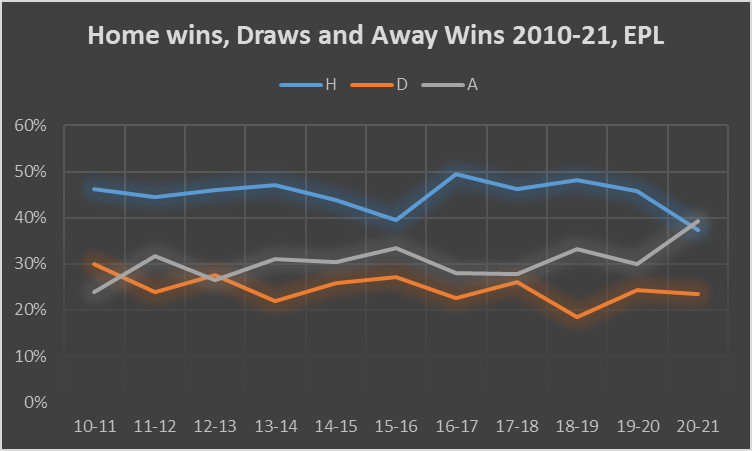 The results for the English Premier League show a substantial drop in home wins. The home win percentage has dropped a staggering 18% vs the average for the seasons before. In fact, the home advantage seems to have disappeared totally, as the number of away wins is slightly HIGHER than the number of home wins. This development is extreme and the English Premier League is the only one where this is the case – however, as you will find, a reduction in home advantage is generally the case (as expected based on the overall results). 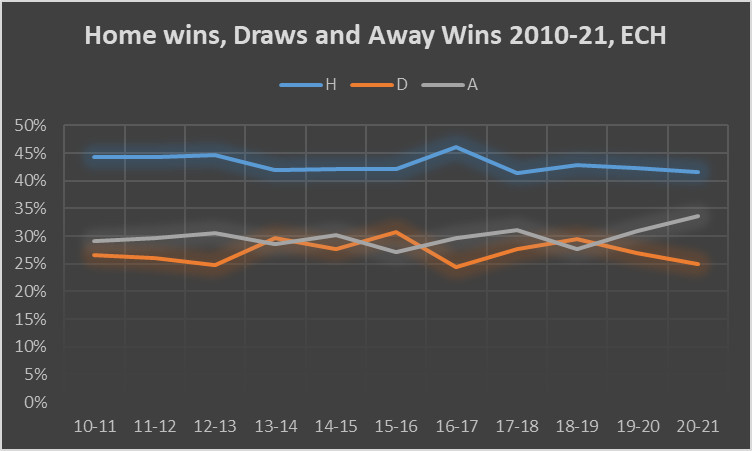 From one extreme to the other: While the home advantage has totally disappeared in the best English league, the results for the second-best English league are quite different. Yes, the home advantage seems to be a bit less strong, however, with only a drop of home win percentage by four points, the difference can be statistical variance just as much as an actually observed difference. The home win percentage during the 2020-21 season has been matched in other seasons as well, suggesting that the current season is not an outlier and therefore it seems that the home advantage in the Championship has not been (majorly) affected by the lack of home crowds. 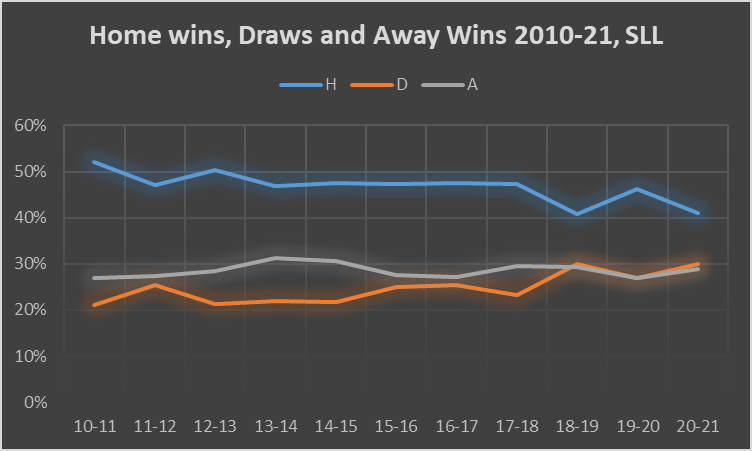 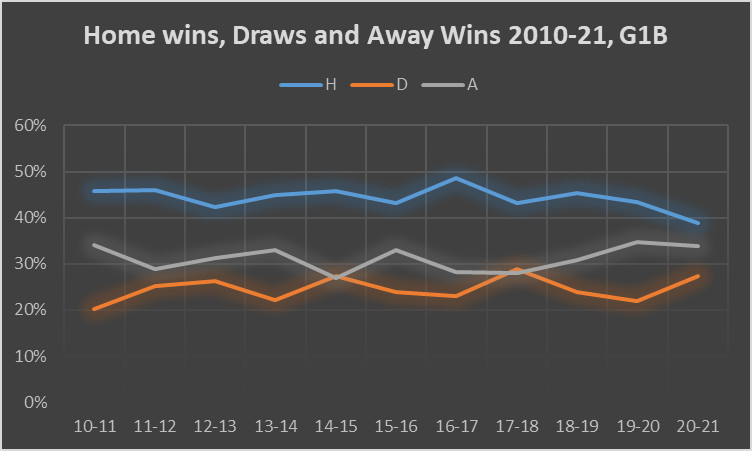 I have read elsewhere that the German 1. Bundesliga was one of the leagues that were most affected by the lack of home crowds (in terms of home wins), and while we find that other leagues are actually more affected, the best German football league certainly appears to have a reduced home advantage following the spectator-less matches. 13% fewer home wins in the current season vs the average of the seasons before and an ”all-time low” (for the period analyzed) suggest a definite reduced home team advantage here. 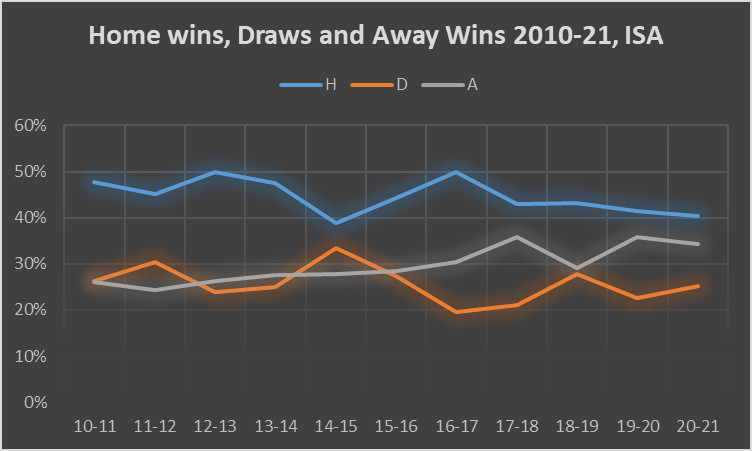 The effects of the lack of home crowds in Italy’s Serie A are a bit less conclusive than the others. While the home win percentage in the current season has indeed dropped by 10% vs the average of the seasons before, the home win percentage during the 2014-15 season was actually even lower, so just using the lack of home crowds as evidence for a reduced home team advantage could be wrong. That being said, the fact that this season is low is probably also not a coincidence given what we find generally to be the case. 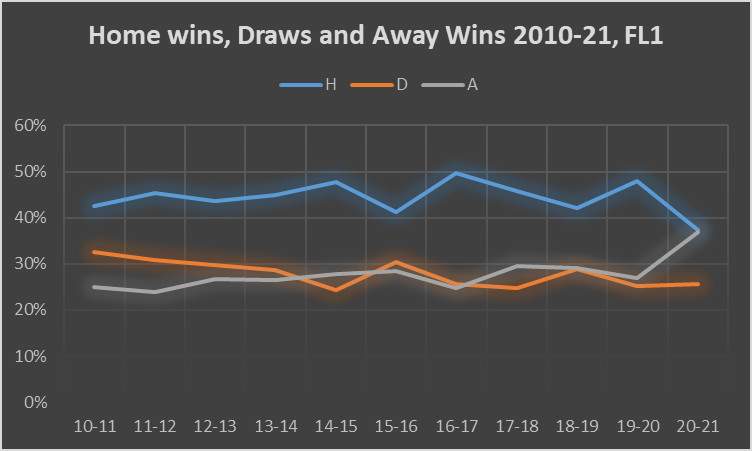 The French Ligue 1 is definitely a strong case for our hypothesis that the lack of home crowds reduces any home advantage. This season has seen the number of away wins match the number of home wins, i.e. the home advantage has been reduced to nothing. The home win percentage has dropped 17% this season vs the average of the seasons before.

We have looked at the six largest leagues in Europe (based on revenue) and analyzed if the home team advantage is still prevalent when the matches are being played without spectators, specifically without home support.

We found that overall the home advantage has been reduced by 12%.

We also found that there are differences between how the various leagues are affected, with the following learnings to highlight:

In the England Premier League and the France Ligue 1, the home advantage is gone, as the away teams win at least as often as the home team

In the England Championship, the effect of the lack of crowds appears to be negligible

For the others, we find a significantly reduced home advantage